Born in Kaas, Denmark, Viggo immigrated to the United States with his family when he was 5 years old. After growing up and attending public school in Greenwich, CT. he attended Syracuse University where he received his BFA and MFA. He then obtained his teaching credentials and began teaching art in Marathon, N.Y. and finally at Roslyn High School on Long Island, N.Y.
While teaching Mr. Madsen remained a prolific professional artist showing in over 200 solo exhibitions in the United States & Europe. He was a professor of art at Nassau Community College for more than twenty years, and was a past president of the New York State Art Teachers Association.
A number of private and public collections claim ownership of his work including Pall Corporation, Publishers Clearinghouse, S. Pellegrino, Penoras Gallery (NYC), C.W. Post College, Anderson University and The Smithsonian Institution Traveling Exhibition.

During his life Mr. Madsen continued to create and hone his art through studies at the The Instituto Allende in San Miguel de Allende, Mexico, Denmark and found new inspiration during family travels to eastern Pennsylvania and southern Missouri. One of the most competitive learning experiences came from his shows in The Village (NYC) where he was review by The New York Times as, “One of Long Island’s best known printers” and “Charming illustrative and richly textured snow scene set the tone of the show” 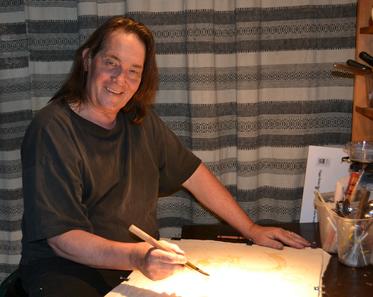 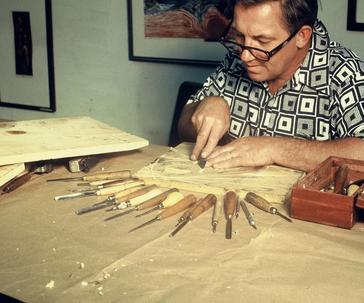 First introduced to art by his artist father, he grew up in New York visiting some of the greatest art museums in the world and began college as an art major. During college, he left the world of visual art and embarked on a successful 30-year career in the music industry. These many years later Kirk has returned to creating art which is why we say,

“the art goes on”.
Kirk’s creation of fiber art is influenced by his father’s unique “batik” style, the 1970’s hippy bohemian “tie dye” culture of his youth and today he is drawn to the ancient technique of Japanese, “Shibori” fabric art. He often uses multiple techniques in creating his 2-D and apparel creations.
Always in state of experimentation he turns to both traditional and non-traditional tools such as pvc pipes, surgical hemostats, artificial sinew, bees wax, wood and metal blocks, traditional tjantings and more. Searching for new ways to twist and ply fabric, dry dye with ice and snow is all part of the journey to his Madsenarts creations.

Our collection of Avalon and Fillmore posters brought us to the world of museum and exhibition posters. And of course, the posters that started it all............Family Dog Posters, handbills and cards.
Certainly not least are the prints, note cards and batiks created by Kirk Holm Madsen and largely based on the original works of his father Viggo and sometimes inspired by his rock ~n~ roll background !